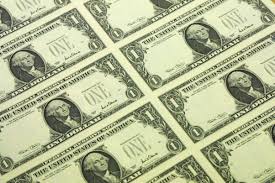 Nothing is more frustrating to me than watching American women and girls handle paper currency  unaware of the impact the absence of images of women has on their psyche.  I asked a Capitol Hill staffer at a local DC restaurant if she noticed all the money contained images of men.  “No,” was her indifferent response.  “Now that you know, do you care?”  “No.” Of the seven bills printed by the US Treasury not one features the image of a woman.   It’s a common misconception that all denominations of US currency feature images of former United States Presidents. A likeness of Secretary of the Treasury Alexander Hamilton is on the ten dollar bill and inventor Benjamin Franklin’s image is on the one hundred dollar bill.

Martha Washington was featured by herself on the front of $1 bill in 1886 as well as with her husband George in the 1896 “educational series.” The only other woman to appear on U.S. paper currency was Pocahontas, who appeared on a $10 bank note in 1869 and on a $20 demand note in 1865. It’s astounding that only two women have appeared on our nation’s currency since its inception, and neither in the last century.

Canada, our neighbor to the North has women on its currency.  Queen Elizabeth II is on the front of the $20 note. In 2004, the Bank of Canada unveiled a new $50 bank note featuring the images are of the Alberta women known as the Famous Five. In 1924 they asked the Supreme Court of Canada whether the word “persons” in the British North America Act included “female persons.”  Unbelievably the answer was a resounding NO!

Currency is the most ubiquitous symbol of our nation and literally touches almost every citizen on a daily basis. The issue of who is on our nation’s currency sends an important message, both internally and to the rest of world, as to who we are and what we value.  How can the female citizens of our country feel respected when they get a daily reminder that their nation renders them invisible? How can the other nations of the world take the United States seriously as a champion of human rights when our highly prized greenbacks lack diversity? Our government can preach gender equality, but what our citizens see overrides what our government says.

In 2016 in response to the call for female representation on United States Paper Currency the Treasury Department announced that Harriet Tubman would be the new face of the twenty dollar bill.  The release date was scheduled for 2020 commemorating the 100th Anniversary of Women’s Suffrage.  Alice Paul and Marian Anderson were also scheduled be on the back of the ten dollar bill.  In April of 2018, the Treasury Department announced that any plans to change the face of currency were put on hold.