The four coins minted by the U.S. Treasury, the Lincoln Penny, the Jefferson Nickel, the Roosevelt Dime, and the Washington Quarter, all send a subliminal message to children that reinforce the status quo.  Men, not women, become President.  It is this pervasive and continual male dominant messaging that makes it hard for women to become partners in law firms, CEO’s and most importantly President of the United States.  The glass ceiling is real and it is reinforced on a daily basis by our government’s branding of women.

Aware of this disparity the United States Treasury introduced the Susan B. Anthony dollar into circulation in 1979.  Production was suspended two years later due to poor public acceptance.  The Susan B. Anthony dollar was reintroduced for one year in 1999 before it was permanently suspended. The public thought it looked too much like a quarter and mistakes were frequent.

The  second attempt at introducing a coin with a female image was the Sacagawea dollar.  Also known as the golden dollar because of its bright golden color, it has been minted every year since 2000.  It was not released for general circulation from 2002 to 2008.  It was put in circulation from 2009-2011 but was withdrawn from 2012 onward due to its general unpopularity with the public. 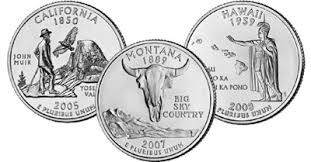 From 1999 through 2008, The 50 State Quarters Program featured unique designs on the reverse of quarters for each of the 50 U.S. states, the District of Columbia and each of the five U.S. Territories.   The fifty-six unique designs celebrated the history and grandeur of the United States.  Many states chose to illustrate America’s noteworthy topological features.  Animals were also a popular choice. Nine states honored men. Only one state honored a woman. Who was the lone woman honored in this sea of masculinity? Helen Keller, from the great state of Alabama.

I asked a member of the DC City Council who was on the committee that selected Duke Ellington to grace the District’s quarter, which women were considered. “None.  Women didn’t make the short list.”  There is nothing more disempowering than realizing you weren’t even important enough to consider.  I honestly believe the omission of women was not intentional on the part of the DC City Council, but a reflection of the current  status of women in the United States.